British designer Abram Games (1914-1996), whose work is currently on exhibit at the HMCT South Campus through July 28, holds an important place in the legacy of twentieth-century graphic design. For over five decades he interpreted the social, political, and commercial pulse of his country by absorbing the influences around him and referencing them in his works. Nevertheless, he may be overshadowed in graphic design history by his contemporaries and friends Josef Müller-Brockmann, Tom Eckersley and Paul Rand, all born in 1914 as well; or by the simple nature of our visual memory to recall a great design but not its designer.

As a graphic thinker and social observer, Games created designs that commanded attention and sparked reactions. His works were often direct and deceptively simple: striking images joined compelling slogans rendered mostly in hand-drawn display lettering to capture the eye, mind, and heart. He followed tradition by using familiar objects, then embraced cutting-edge modernism by rendering them as simplified shapes or bold silhouettes that sometimes doubled as playful visual puns. By uniting the commonplace with the avant-garde, Games quickly delivered an emotive message. Even today his works can inspire, amuse, or disturb.

Games seemed destined to be a graphic designer, with a series of timely events paving his way. In 1914, Games was born into a world swiftly becoming modern. World War I ushered in a rapidly changing, industrialized, and fast-paced lifestyle that altered how Games would experience art, design and technology. As a newly-important medium for communication and visual persuasion, posters became emblematic of one of the most robust and politically charged eras of graphic design.

Growing up in the 1920s and 30s, Games began to learn about art and design from his father, a professional photographer and painter who involved Games in his studio work.  After spending two terms at Saint Martin’s School of Art, Games was resolved to become a great poster artist, and determined that the key to his success rested on developing his skills of figure drawing and knowledge of human anatomy. Mostly self-taught, this was proven to be true by the masterful use of the human form throughout his work, whether realistic or abstract. Games also saw posters all over London: on walls, in store windows, and on public transportation. Once used as a valuable wartime conduit for communication and the dissemination of information, posters became influential commercial advertising tools for a reviving European economy. Games recognized their appeal and impact, and set out to design what he considered “the kingpin of all publicity media.”

In the early 1940s, World War II interrupted Games’s nascent commercial design career.  Posters reemerged as a vital means of persuasion, amassing the support for a new conflict. Games became the official war poster artist of Great Britain and joined an army of volunteers creating posters that informed the citizenry and implored everyone to join the home front effort. Influences on Games included the works of A. M. Cassandre, Jean Carlu, Edward McKnight Kauffer, Austin Cooper, and Tom Purvis. His artistic style would later be known as European Pictorial Modernism. As design educator Philip Meggs defined, this approach emphasized the seamless and “total integration of word and image while maintaining a pictorial reference and visual organization” to ensure persuasive communication. Pictorial Modernism incorporated elements from the new modern art movements that formed and flourished earlier in the century, including Constructivism, Cubism, Dadaism, and Surrealism. Games admired the strong personal style of the new modernists—Herbert Matter, El Lissitzky, and the artists and designers of De Stijl and the Bauhaus—all of whom created memorable and striking posters.

The postwar economic boom in Western Europe galvanized what Games designed next. In the 1950s and 60s, lifestyles changed significantly as Great Britain and other industrial nations became consumer oriented. Games’s advertising and travel posters offered products to buy, services to use, and destinations to visit.  His corporate logos, book jackets, magazine covers, and animated graphics for a new medium called television, created visual identities that turned companies and products into household names.

As the son of Jewish immigrants, Judaism was important to Games. Moved by the British Army’s film of the Bergen-Belsen concentration camp (1945), he produced work that supported post-war victims of World War II and created designs throughout his life for the Jewish community, often for a small honorarium or at no charge.

Games witnessed events that shaped half a century, then depicted them with passion and intelligence to achieve maximum impact. This great synchronicity of timing and talent made him one of the most influential graphic designers of his time.
–David Mihaly and Gloria Kondrup 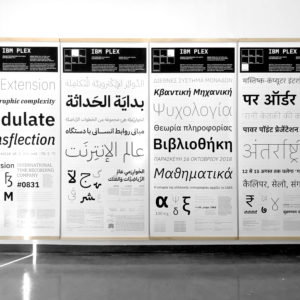